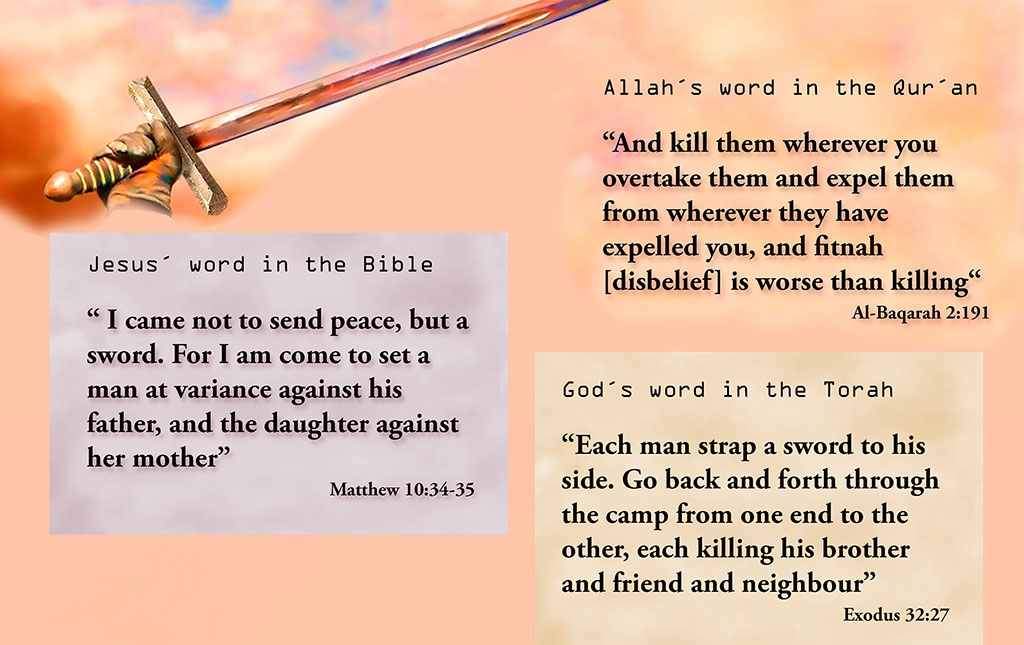 If anything is a curse, it is the Bible´s and the Qur´an´s incitements to murder dissidents. In these for monotheists guiding texts of the Abrahamistic doctrines, lies the cause of thousands of years of murder, persecution, rape and other atrocities. In the name of religion, believers have to a terrible extent slaughtered infidels. According to the American writer, historian and philosopher William James Durant, the Islamic conquest of India between 1000-1500 AD was probably the bloodiest with, according to the Belgian Orientalist and Indolog Koenraad Elst, nearly 80 million Hindus killed. In second place came possibly the Thirty Years´ war between Catholics and Protestants in the 1600s, with between 3-11.5 million killed (depending on the source).

From this immense tragedy arose wise citizens and demanded the church’s separation from the State. With the Enlightenment came the requirement of resistance towards the dictatorship of the deity and the idea of ​​democracy and freedom, spearheaded by French and American revolutionaries. But oppression survived despite the intellectual advancement, and in the Christian God’s name millions of people were enslaved during the 1800s and 1900s, and America’s indigenous peoples were decimated on the border of extinction.

In the 2000s, the Islamic caliphate-eagerness by the Islamic State in Iraq and Syria gained new momentum, and murder in the only God’s name became as barbaric as ever in human history. When will the curse then stop? Probably only when leading monotheistic priesthoods around the world agree to exclude any incitement in the Bible and the Qur´an to murder dissidents. Such incitements include:

“Each man strap a sword to his side. Go back and forth through the camp from one end to the other, each killing his brother and friend and neighbour” (Genesis 32:27).

The text then describes how God is pleased by the killing of infidels. In Christian rewriting, Jesus’ is told in Matthew chapter 10 to have said:

In the Qura´nic rewriting it became:

“And kill them wherever you overtake them and expel them from wherever they have expelled you, and fitnah [disbelief] is worse than killing“ (2:191).

But, how and why did this happen? The answer is to be found in a 4000-year old culture. When King Naram-Sin, around 2200 BC, proclaimed himself to be a god of the Akkadian empire (from the eastern Mediterranean to western Iran), a process began that would later lead to the idea of ​​an omnipotent god, in whose name justice would be administered and people of other faiths murdered. Unlike his grandfather Sargon the Great, founder of the world’s first empire, Naram-Sin broke against everything that had hitherto been sacred: From having been victims of god´s benevolence, Naram-Sin introduced the idea that he was divine and that from him emanated divine decrees. In one stroke people’s relationship to the pantheon was transformed. His idea of ​​an all-powerful ruler on earth, was later to pave the way for the idea of ​​an omnipotent ruler in heaven – Yahweh / God / Allah – whose decrees required blind obedience.

The opposite of monotheism, polytheism, was with a few brief exceptions in history, the prevalent belief among people until the 1000’s B.C. During 100,000 years, perhaps even as long as 200,000 years, that is, as long as Homo sapiens´ brain constitution was finished in its present form, humans have designed gods and, above all, promoted fertility.

People also generated models of how the earth and the sky were created, the meaning of life, and also rules for how life on Earth should be arranged. Everyday codes were adapted to how human beings best could and should appease the gods. The hunting and gathering man showed great respect for nature, whose capriciousness could be controlled only by gods. Man thus became the only creature who has pondered on its existence to the degree that he has constructed a higher power of knowledge, which itself unknowingly, can not know what the higher power knows about the knowledge it has created.

This apparent concentricity in human minds continued to shape the world´s communities during the nomads life and when the first civilizations were constituted around 6000 years ago on the sandy plains between the rivers Tigris and Euphrates in present Iraq. There, a veritable explosion of gods occurred. Besides the common gods, the evolving city-states worshipped also their own city gods, and people worshipped even personal gods. None of the more important gods were superior to the others, which however did not stop quarrels between worshippers, as in the story of the goddess Inana and how she got the primal creative universal energy, “Me”, from the wisdom god Enki. High priestess Enheduana, who lived before patriarchy was established, therefore considered Inana to be the supreme god.

But an atmosphere of compromise was after all the rule, as shown in the following text:

The reason that Naram-Sin still managed to thrive in his self-indulgent prank, was partly the result of the Sargon dynasty´s great success on the battlefield, but also that the “Me” hierarchically esteemed high-priests (or priestesses) higher than gods. A strange relationship, which however can give an indication why the Sumerians – this incredibly talented people whose discoveries are still followed by modern man – recognized a human presence in the creation of the gods.

In Naram-Sin´s footsteps followed a fortiori King Shulgi two centuries later. The Akkadian society (now Iraq), which succeeded the Sumerian, was now pronounced patriarchal and the demonization of women (especially women’s sexual desire) had begun. Shulgi´s father, King Ur-Nammu, confirmed this, among other things, in this legislative text:

“If the wife of a man, by resort to her charms, enticed a(nother) man, so that he slept with her, he! (i.e., the husband) shall slay that woman, but that man (lit. ”male”) shall be set free”.

The revelation of Monotheism on the world´s stage less than a millennium later, cemented the patriarchal hegemonic gender power and its oppressive ideas, which obviously, based on the won favour with (male) idolaters, was received as a good idea. But the idea of ​​one God, and that only a selected ethnic group should spread the divine decrees, would later prove disastrous. The human brain’s evolutionary constitution (its available cognitive spectrum) would prove to be incompatible with the idea that only one view is the correct one. From Judaism was born Christianity and Islam. Both are based on the doctrines of Judaism but with their own euphemisms.

The text is excerpted from the book ”EVOLUTIONARY ideas – A short story about why, when and how humans (by all accounts) took the wrong path” (256 pages, 2015).