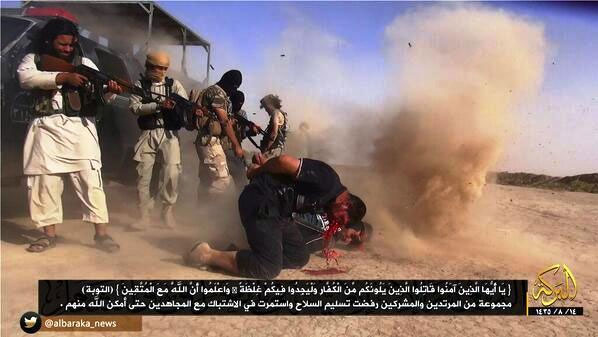 The picture shows how Daesh (IS) executioners in the name of Allah kills tied Syrians. How can the concept of Allah drive people to such barbaric atrocities?

Gothenburg (second largest city in Sweden) is pointed out as one of Daesh’s (IS) primary recruiting bases in Europe. “A pantry full of cannon meat to the IS” says Ulf Boström of the Integration Police in Gothenburg. SÄPO (Swedish Security Police) has documented 130 cases from Gothenburg, but argues that the real number is higher.

But what is the mechanism that motivates Muslims raised in Sweden to join Daesh?

Jihadists are not much different from other well-justified (peaceable) Swedes. One difference, however, lies in the cultural codes that Islamists brought to Sweden: Authoritarian upbringing in theocratic societies has brought a different outlook on life. If intolerance of dissent is nourished by frequent alienation from the Swedish democratic system and humanistic ethics codes in favor of Islamism’s divine dictatorship, then individual young Muslim are predestined to apply to movements like Daesh. A process evolution has been brought about and is in conflict with the (older) brain’s rational constitution. The process is controlled by the brain’s emotional center, the limbic system, which stands for emotional experiences, and the prefrontal cortex, which is responsible for rational thinking. Yossi Chalamish, a brain scientists at the Weizmann Institute in Israel, claims that at a young age, and especially between the years 13-25, the limbic system in relation to the prefrontal cortex is vastly active.. Emotions run high like tsunami waves in young bodies. Only in maturity, balance is achieved and prefrontal cortex thoughtfulness balances the emotional surge. Chalamish makes a comparison between knife attacks by individual Muslims in Israel against Jews and Daesh barbarism in Syria in Iraq: Both are the result of elimination of the prefrontal cortex. “Emotions have taken over rational thinking”, Chalamish claims.

Rulers, leaders, dictatorships, democracies, anarchists and so on utilise the above mentioned evolutionary development to enthuse companionship and spread ideas. Problems arise when leaders, for religious or psychotic reasons, inhibit the prefrontal cortex directive and instead allow the limbic system to take over. That is when the normative behaviour is replaced by blind obedience of a ruler’s will and/or religious decree.

A successful recipe to counter such evil manifestations is to eliminate the breeding ground for the most barbarous expressions of killing from reaching the youthful ‘wild brains’. Eliminate all the exhortations in the Bible and in the Koran about killing in the name of Yahweh / God / Allah (i.e., Leviticus 32:27, Matthew 10:34 and Qur’an, 2: 191)! Also, install a strong curriculum to include mandatory teaching of democracy in order to inform every foreign-born citizen the meaning of living in a majority-deciding open democratic society with rights as well as obligations. In my opinion, we ask too much of some immigrants to quickly, and without proper guidance, understand and embrace the Swedish model.

Religious freedom does not mean that we must accept a deity’s dictatorship unconditionally (be it Judaism, Christianity or Islam). It is inconsistent with democratic values that the supporters of religious dictatorships can run wild and that Monotheism cannot be criticized, or at least be questioned, because of political correctness. To objectively criticize the deity dictatorship is to protect democracy and democratic decisions, and has nothing to do with either anti-Semitism or Islamophobia. Halacha (the Jewish legislative system) and Sharia (Islam’s legislative system) is incompatible with democracy. Full stop! Divine decree must be questioned. They are, after all, created by humans to control the masses and correct the ‘mistakes’ evolution have spawned.